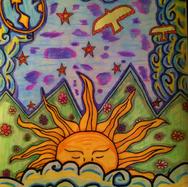 Living in Springfield, MO, the band formed after Byrd and Hayden started playing together as teens. Hopkins would later join the band, replacing the original bassist. Isolated in a basement most of the time, the three realized they shared the same passion for music. That passion encouraged them, and still does, to continue their journey as The Captain's Son.

This led the three to re-locate to Long Beach, CA in the summer of 2016. Leaving jobs, girlfriends, and a handful of other responsibilities, TCS became a small fish in a big pond. A few years of constant gigging and non-stop writing has given the boys a good foundation in Southern California. This led them to Josh Adams, a lone guitarist who had just moved to North Hollywood. Byrd and Adams knew one another from time spent growing up in Georgia. Adams started playing with The Captain's Son late 2019.

((Actually, the name, The Captain's Son, was thought of in late 2010 when Jarred & Paige

formed the band with the original bassist. Will came along in 2015.))

We're Captain's Son and we, in fact, did get our name from

Also, true fact, it's because all four of our dad's are captain's.

​Be kind to yourself, the people around you,